MIDI channels in Cubase - or there, and back again

January 13, 2013
The other day a friend and I experimented with connecting his excellent monotribe (with the miditribe extension) to my Cubase to see if we could record the MIDI-signals coming from it. For Science! This made me realize that, being a MIDI-noob, I hadn't understood how MIDI worked in Cubase, and none of my google searches seemed to help either, since being a MIDI-noob, I probably didn't have the right vocabulary to specify the searches with.

The thing is that the 'tribe is supposed to send the synth MIDI on CH 1 and the drums on CH 10. We added two midi tracks in cubase and selected the channels we wanted in the track info. Like so:

This did not work, as we got a mix of drums and synths at once all over the place. Interesting, but not right. To try to understand this we created a default project with 16 MIDI tracks, one per channel, and lo and behold all MIDI was sent to all channels.

OK. We figured we needed to filter out just the channel needed per channel so we added a MIDI insert called "Transformer" and tried to filter out only the channels wanted, i.e. CH 1 for MIDI track 1, CH 2 for track 2 etc. This didn't work either, so we gave up and recorded a song about microwave ovens using the sound from the monotribe (syncronized via MIDI), a monotron duo, GrooveAgent One, Retrologue, a Squire bass guitar, an Epiphone guitar, and our voices. (This will show up on our SoundCloud stream sooner or later. UPDATE: It has.)

Later in the evening I revisited the problem and found the button called "Input Transformer". The yellowish guy on the right here:

If you choose "Local" you get to a window like so and you can choose a preset for filtering MIDI channels: 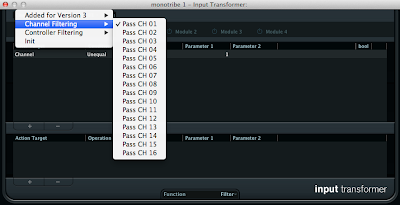 Voilà. This lets you filter only the channel(s) you want to record from an interface, so that you can indeed record one channel on one track and one channel on another track.

Maybe there are other, better, ways of doing this (?), but this seems to do the trick.

Ah, and the channel selection from the two first screen shots are the channels that are sent to the things receiving data from the MIDI track.

Another time I'll tell you about how I almost deleted most of the tracks I have recorded since Steinberg changed their "save project to new folder"-function (the last two-three years or so)...

Popular posts from this blog

August 04, 2013
A couple of years ago my (most of the time excellent) Maranz SR6004 acted up. It did't want to turn itself on. Properly. Just stood there and blinked rapidly. Its little red light that is. At me. The solution was so simple that I didn't bother to write it down as I was sure to remember it. Alas, no. Some weeks ago it did it again. (Can it be the heat?) Just stood there blinking rapidly at me. The manual just said - as it said last time around - that it was time to return the unit to it's maker. Or similar. Some googling led me to this page:  http://www.allquests.com/question/4056803/Marantz-XXX4-Series-Failure-Issues.html  The technical term for what I had experienced seems to be "The Pop of Death". Aïe. But!, humongous letters said: YOU CAN SOMETIMES RESET THE UNIT BY PRESSING SURR MODE, CLEAR AND EXIT SIMULTANEOUSLY And so I did. And so it was fixed. And all was well. (And now I have written it down for the next time.)
2 comments
Read more

November 02, 2012
When launching Skype in 64-bit Ubuntu 12.10 on my Asus U35J the webcam image was all topsy-turvy. Since I don't live in Australia, or something (tsk-tsk), this was not really cutting it for me.  Some quick googling led me to this forum post:  http://forums.pcpitstop.com/index.php?/topic/198236-why-is-my-skype-video-showing-upside-down/   After making sure that the necessary packages was installed (notably  libv4l-0) I adapted the command from the forum post to: LD_PRELOAD=/usr/lib/i386-linux-gnu/libv4l/v4l1compat.so skype and voila, the image was OK. Next step is for this to be set to default, which seems to be outlined here (in steps 2 and 3):  http://pc-freak.net/blog/how-to-fix-upside-down-inverted-web-camera-laptop-asus-k51ac-issue-on-ubuntu-linux-and-debian-gnu-linux/  (Actually this post seems to cover most of what is useful from the forum post above...) UPDATE (19/04/2013): Since my laptop was working fine, I decided it was about time to fix it. Also I wanted to
1 comment
Read more

Using a Raspberry Pi as a MIDI USB/5-pin bridge

January 08, 2017
In my constant... need... to get everything music instrument related to communicate with each other, I wanted to look into ways to get some of my keyboards/synths with only MIDI over USB to talk to devices with regular good old-fashioned 5-pin MIDI ports from the eighties. Cables! First I had a quick look at off the shelf solutions. The most interesting one being the Kenton MIDI USB Host – providing MIDI host functionality for USB devices as well as regular MIDI in and out in a small box. Unfortunately it is rather expensive (~125 €) and a reliable online source warned me that it was not entirely stable in collaboration with my OP-1, so I started thinking of more... home-grown solutions. I decided to try to use my old Raspberry Pi and see if that would serve as a USB host with a borrowed MIDI USB adapter. (Thanks Simon.) A cheaper, and, as an added boon, a nerdier solution. Step 1: Get the USB MIDI device up and running This was the easy part. The device I have been lent
5 comments
Read more